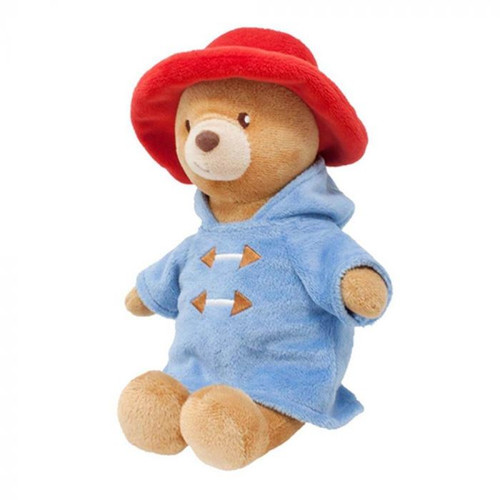 Special Features:  My First Paddington is an irresistible plush toy made from soft velour. He features bright and bold colours making this a fun, vibrant and eye-catching gift perfect for the nursery, the playroom and for take-along fun! Paddington timeless bear wears his famous red hat and blue duffle coat with a hood.

Since Mr and Mrs Brown first found Paddington at Paddington Station he has undeniably become one of the world's most famous bears, loved by generation after generation. First published in 1958, ‘A Bear Called Paddington’ is a classic of British literature and loved by fans worldwide. More than fifty years ago, a small bear from Darkest Peru stowed away on a ship headed for faraway England. He was sent by his Aunt Lucy (one of his only known relatives, aside from an Uncle Pastuzo who gave Paddington his hat), who has gone to live in the Home for Retired Bears in Lima. He arrived at Paddington Station with nothing but a suitcase, a half empty jar of marmalade, and a label around his neck that read ‘Please look after this bear’. He was discovered by Mr and Mrs Brown, who were just the sort of people to welcome a lost bear into their family. They promptly named him Paddington, after the station, and took him home to thirty-two Windsor Gardens, where he has lived ever since. The classic stories of Paddington Bear continue to charm readers worldwide with his earnest good intentions and humorous misadventures. One of the world's classic bears Paddington has timeless appeal and is loved by all ages.