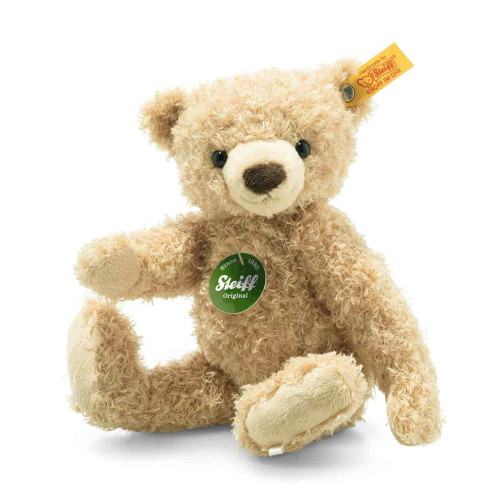 Special Features: The time has come for the “Teddies for tomorrow”. And this Teddy bear is playing a responsible leading role! Measuring 23 cm tall, Max Teddy bear is made of light brown, slightly curly PET plush and is wonderfully soft. He is 5-way jointed, which means he can move his head, arms and legs. His snout and paws are lighter in colour and made from controlled biological cultivation. “That’s certified organic cotton”, Max knows. His filling comprises recycled PET bottles. Max Teddy bear is delighted that the designers at the Steiff workshop now also make teddies like him. And he’s excited to know all about what he was “in his former life”. Sometimes he falls asleep contemplating this, nestled in the arms of his favourite little human, who ruffles his fur from his ears to his soles – and both are content!