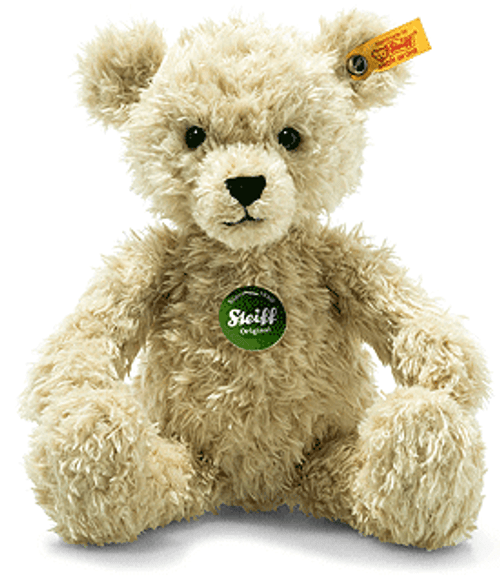 Special Features: “Big and small bottles, juice, milk, lemonade, and so much more besides”. Anton is fascinated by the fact that his filling is made from recycled plastic bottles. Instead of ending up somewhere as landfill, they are giving his body its wonderful shape! Measuring 30 cm tall, our beige-coloured Anton Teddy bear is a wonderfully soft and cuddly Teddy bear from the “Teddies for tomorrow” series. He has a beautiful round head and a wonderful, tousled plush coat made from PET plush. His contrasting short-pile snout features a beautiful, intricately stitched, triangular nose and Anton Teddy bear wears his stainless steel “Button in Ear” in his left ear with pride. “You’re welcome to stroke me”, he encourages his friends. And he smiles happily: “When children see that you can make Teddy bears like me out of recycled plastic, they’ll be happy to help sort the rubbish!”