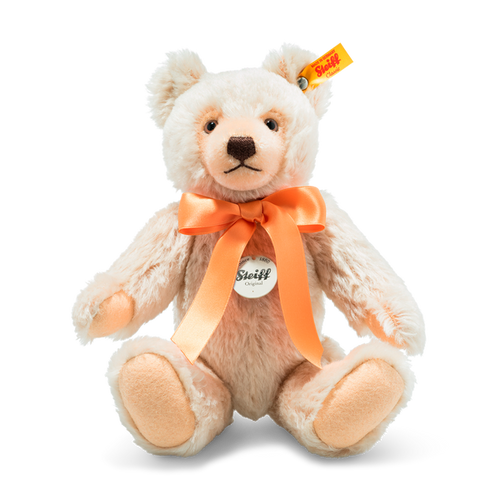 Description: The Steiff mask-type bear was released in 1966 as a variation on the “Original Teddy”, which was very popular at the time and had short arms and legs, a round head and a round snout. The mask-type bear came with a heart-shaped face made of short mohair and was stuffed with synthetic material for the first time. 55 years after the birth of this crowd-pleaser, it’s now time to introduce a new lovingly crafted mask-type bear to the prestigious Steiff range. Measuring 29 cm tall, our 5-way jointed Original Teddy bear is made of top-quality, cream-coloured mohair. He has a typical face shape with a short-pile snout in pale apricot. His brown/black nose and eyes provide an exciting colour contrast, while his felt soles and paws, and his wonderfully decorative bow come in apricot, blending in perfectly with his cream coat. Complete with his “Steiff Original” breastplate and stainless steel “Button in Ear”, this new and elegant Original Teddy bear will capture the hearts of Steiff friends – and will bring back wonderful childhood memories for some.